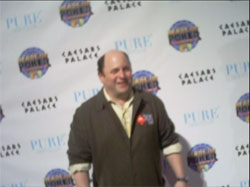 The crowd at the NBC Heads Up Poker Championship’s pairing party was a bit more than the Caesars security team was expecting. Poker fans cheered, and shoved, and photographed, wishing their favorite players good luck

Early on there are some interesting match-ups between some well known online poker names and well known land based poker professionals, pitting the virtual world of poker with the tangible.

Imagine yourself playing an online freeroll, outplaying the entire field, and actually winning your seat in the Heads Up Tournament, a trip to Vegas, a walk down the red carpet and into Pure, one of the most exclusive night clubs on the Las Vegas strip for the pairing party.

A few hours later imagine finding out that your reward for all that and being the last entrant to make the tournament is a first round meeting with Phil Ivey, fresh off the plane his WPT LA Poker Classic win.

The brackets will start with Hearts at 10:15am followed by Diamonds at 1:15pm, Clubs bracket at 4:15pm and finally the Spades will start at 6:45pm.