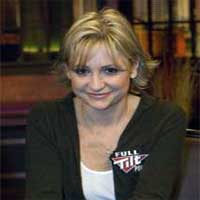 Perhaps it was the location of her up-bringing that embedded the poker skills into her very core, as by the age of 8 years old, Jennifer was not only playing poker for real money, she was winning! Jennifer Harman turned her attentions to a professional poker career in the mid-80’s, playing for progressively higher stakes to earn a well deserved reputation as one of today’s most prolific poker players.

In her early years, Harman began suffering from kidney problems – an illness shared by both her sister and mother, who passed away from the illness when Jennifer was only 17 years old. Jennifer was forced to undergo a kidney transplant as well. But that didn’t stop her from enjoying her greatest passion, playing poker.

After graduating from the University of Nevada, Reno, Jennifer Harman made the weighted decision to play poker professionally – a decision that caused a large rift between herself and her father. Fortunately, after suffering through years of little or no contact, Jennifer and her father have reconciled and now enjoy a healthy relationship.

Over her highly successful career, Jennifer has made a huge name for herself. Commonly miss-dubbed as the best ‘female’ poker player, Harman is actually one of the best poker players in the world, regardless of gender. She has racked up an impressive cash total of $1,850,000 (as of Sept. 2007), including more than 40 cashes, two 1st place finishes and two World Series of Poker (WSOP) Bracelets.

Jennifer Harman earned her first WSOP bracelet in 2000, winning the $5,000 No Limit Deuce-to-Seven Draw against such final-table opponents as Lyle Berman and Steve Zolotow. What made this win so memorable for Jennifer was the fact that she had never even played Deuce to Seven Draw. Jennifer finished in first place and cashed $146,250 after receiving a 5-minute tutorial from Howard Lederer just before the start of the game.

At the 2002 WSOP, Harman was awarded her second WSOP Bracelet for taking down the $5,000 Limit Hold’em, cashing in for $212,440. Jennifer Harman really worked her poker magic in this tournament, going up against a field that included Humberto Brenes, Allen Cunningham and Mimi Tran. Harman is currently the only female poker professional to claim two bracelets in WSOP open events.

Jennifer is known for being one of the regulars – and the only female regular – in the high-stakes cash games at the Bellagio “Big Game”. She has made appearances on the NBC network series, “Poker After Dark”, winning the tournament held on Week 8. She also appeared on “High Stakes Poker”, on series on GSN.

Jennifer Harman is a proud member of Team Full Tilt, a vast group of highly skilled professional poker players who participate exclusively in online poker at the Full Tilt Poker site. Harman can be found at the online poker room’s tables, especially in her favorite venue, No-Limit Hold’em cash games.