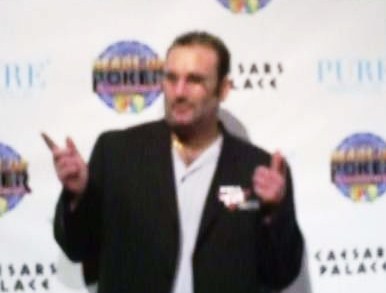 Mike Matusow is a poker personality even more than he is a poker player. He lives his life, he is not just a fixture in it, though sometimes it would seem that the poker great sucuumbs just a little to much to the life, and finds himself in a bit of trouble here and there. Matusow is known for his mouth, for berating other players like Greg Raymer. For swearing, drinking, drugs, gambling and buying hookers.

Matusow is otherwise known in the poker world as “The Mouth” due to his ‘spicy’ nature both off and on the poker circuit. The opinionated poker player first began playing poker seriously in the 90’s from the far side of a poker table, tossing cards into the air to poker players as a dealer. He soon learned the money was on the other side of the poker table, and began his adventure into playing poker as a professional player.

Earlier, in his teens, Mike played video poker on Maxim Casino so much that he continually suffered from strain injuries in his shoulders and arms. At one point Mike even had to attend Gamblers Anonymous meetings because he had begun stealing money from his mother. Right before Mike began his professional career, he was taught the game of Texas Hold’em by Steve Samaroff, a known rounder.

Mike Matusow Does Time in Jail

Matusow was busted by an undercover police officer just after accepting cocaine, according to supporters of Matusow, he was set up, asked by a Narc to provide cocaine and then busted by another. According to those supporters government officials spent more than 6 months befriending Mike, only to bust him.

Mike was offered a deal whereas he was given the option to ‘name his supplier’ Mike passed on that deal. In another deal Matusow plead guilty to possession, and received six months in the Clark County Jail.

It was in the later part of the nineties that Mike began seeing success. In 1998 Mike paid one third of Scotty Nguyen’s buy-in for the $10,000 Main Event of the WSOP. Scotty went on to win the Main Event and paid Mike $333,333 for his stake.

Mike Matusow Cashes in the World Series of Poker

It wasn’t until 2001 that Mike would cash on his own in the WSOP Main Event finishing his final table debut in 6th place. Mike would become known as “The Mouth’ for his repetitive trash talk at the poker table during this time. 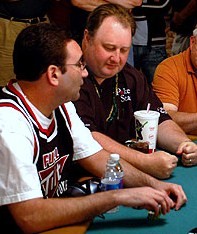 “Don’t mess with me, buddy. I’ll bust you. I have big cojones. You have small cojones.”

Mike would go on to win one million dollars in 2005 when he would finish in 9th place at the WSOP Main Event. Mike then went on to earn another million at the WSOP Tournament of Champions a few months later.

\ Mike finished in third at the WPT Ultimate Bet Aruba Classic winning a quarter of a million dollars in 2004. In 2006 Mike would almost win the WPT Bad Boys of Poker II against Tony G, but Mike couldn’t pull out the win. Mike has also appeared at Poker Superstars events, European Poker Tour and Poker After Dark.

Mike is either liked strongly or disliked strongly in the poker world. Some fans love his trash talk while others hate it. Mike has lived a colorful life that has seen its share of troubles. Mike went to jail for a six month period of time in 2004 when he was caught with cocaine. Drug problems have been prominent with Mike as well as weight issues. Mike continues to participate in several tournaments and events every year as well as hosting opportunities.