The 2009 World Series of Poker added a special event this year to commemorate their fortieth anniversary. The new event was number two on the schedule and consisted of a $40,000 No Limit HoldÃ¢â‚¬â„¢em tournament. Top pros posted the large buy-in vying for the first place prize of $1.8 million+. But it was Vitaly Lunkin who was able to outlast the field and beat Isaac Haxton in heads up play to claim the title.

When final table play began Haxton held the chip lead and would continue to play well the entire ten hours it took to name a winner. Ted Forrest would be the first player to be knocked out of the competition when he went up against Noah Schwartz. ForrestÃ¢â‚¬â„¢s J-10 was no match for SchwartzÃ¢â‚¬â„¢ pocket threes and he was knocked out in ninth.

Schwartz would not be able to hold on much longer though and he would be the next to go after going all in with A-K and being called by Greg Raymer who had pocket Aces. The Aces were too much for Schwartz and he was out in eighth.

This would start Raymer on a roll and he would knock out Lex Veldhuis in seventh then Haxton would knock out Alec Torelli in sixth and then Justin Bonomo in fifth. Now down to four players, game play would continue for some time before the next player would be eliminated.

After some time Dani Stern decided to go for it and went all in with Q-10 preflop. Stern was called by Haxton who held A-K. The board fell J-5-2-2-2 so HaxtonÃ¢â‚¬â„¢s Ace helped him seal the deal and knock Stern out in fourth.

Raymer would be next when he moved all in with pocket fives and was called by Haxton who held pocket nines. The board ran K-Q-10-3-3 so Raymer was out in third place. This left Haxton and Lunkin to duke it out in heads up play.

A 7 came on the turn and a King on the river was no help to Haxton who was knocked out in second place leaving Lunkin to claim the victory and the $1,891,012 first place prize. 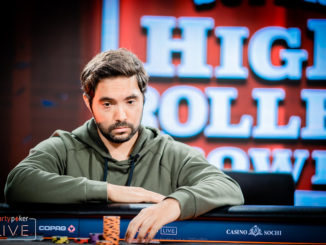