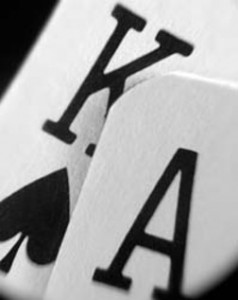 The final three players of the 2012 World Series of Poker have been three handed for nearly 8 hours already today. 21-year old Jake Balsiger, who is a senior at Arizona State, has been working with a short stack all night, but he’s still somehowhanging in there!

Merson and Sylvia moments ago, were found battling it out over a 17.8 million chip pot. The River hit and Sylvia Checked to Merson.

Merson thought it over for a long time, you could literally hear the moments passing until he finally reached back into his chipstack. Merson makes a 14.6 million river bet and again Sylvia folds. A good fold indeed. Merson with pocket aces made trips on the flop.

Sylvia however cannot afford to keep getting into mega-fights like this one and folding.

In a vital hand just a little while earlier we saw Sylvia bully Balsiger off a 20 million chip pot. Balsiger held QJ off suit while Sylvia, who  won the pot, had nothing more than 64 suited!

The 2012 WSOP final table is being shown live in some areas on ESPN, as well as on espn.com, depending on your cable provider.

Over the last few hours Jake Balsiger, who entered the final table this year as the short stack, has been all in twice against Jesse Sylvia for 30+ million chip pots somehow he’s survived both all ins.

The three players remaining in the game include Sylvia, Balsiger and Greg Merson, clearly the strongest player left in the tournament. Merson was coached by Phil Ivey and has signed a new contract with Ivey’s  new poker training site Iveypoker.com.

The World’s Series of Poker is being played right now at the Rio in Las Vegas, Nevada.  Play will continue until a winner is determined.

One Last Look at 2012 WSOP Schedule as the Series Begins