The 2012 World Series of Poker officially kicked off this past Sunday with the $500 Casino Employees World Championship event. The event is open to casino employees and players from all over come out to compete in the event. The event saw a good turnout and in the end it was Chiab Saechao who earned the first place win.

Saechao worked his way through the event to make it to heads up play against Trish Baker. The California blackjack dealer was able to defeat Baker to earn the first bracelet of the series as well as $70,859 in prize money.

When heads up play began, Saechao held the chip lead, 3 to 1. It wouldn’t be long before the final hand would go down. On the final hand, Saechao limped in on the button and Baker checked. The flop came 10Diamonds-7Hearts-2Diamonds. Baker decided to check and Saechao wagered 35,000.

Baker then called and the hand was checked in the dark. The turn showed a 6 of Spades and Saechao checked behind. The river card was a 6 of Diamonds and on this, Baker went all in. Saechao decided to jump right in and go all in as well.Both players were nervous to show their hands and Baker decided to show her cards which were 8-9 clubs, which gave her a straight. Saechao showed Jack-4 of diamonds which gave him a flush on the river and the win.

According to Bluff Magazine, with the win, Saechao earned his first recorded tournament cash out of any kind. Saechao had learned the game just two years ago and he has been able to become quite skilled in the game. Saechao commented: “The first time I entered a tournament I won a World Series of Poker Main Event seat. The year after that I won another one, so I’m like ‘Hm, maybe I can play this game’. I started playing a lot last year, basically just small games (and) small tournaments, but nothing like this.”

Saechao may have cashed out for the very first time but Baker made history in the event. By finishing in second place, Baker earned the highest finish in the Casino Employee’s event for a woman, ever. Baker was happy with her finish despite not winning the coveted bracelet. Baker commented: “I couldn’t have made this much money dealing. But I’m still going to work on Thursday.” 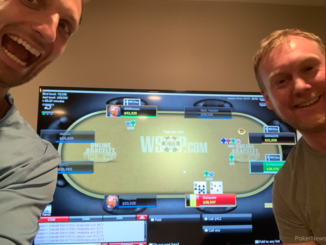