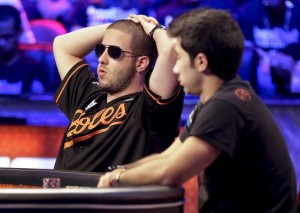 Greg Merson ended the final table of the 2012 WSOP Main Event the same way he entered it – with the chip lead and the respect of all his fellow competitors.

Merson ended a long-winded final table with a heads up victory against Jesse Sylvia when his K 5 of diamonds held up against Sylvia’s Q J of spades. The pot was 4-bet preflop by Merson when he pushed enough chips in to put Sylvia all-in, who would subsequently call. When the the cards were flipped even the ESPN announcers were as surprised as I was to see what they were pinning their Main Event dreams on!

Both players, who were coached by poker tournament legends Phil Ivey and Vanessa Selbst, respectively, had already grinded out a nearly 11-hour battle against amateur Jake Balsiger when it was 3-handed. That was one of the longest in Main Event history, with somewhere in the neighborhood of 200+ hands being dealt during that time alone.

After Balsiger FINALLY went out in 3rd place, it seemed only fitting that the two players who entered the final table with the top 2 stacks would be battling it out for the bracelet and $8.5 million dollars in 1st place prize money. You had Merson, who had overcome drug addiction in the past to wind up where he was today at the WSOP M.E. final table, and then Sylvia, the young poker pro whose largest prior tourney cash was only $36,000.

The conclusion would be relatively short-lived and as anti-climactic as possible, as Merson somehow got all of his chips in with the aforementioned K 5 diamonds and HELD on on a 9-high board (6c 3h 9d 6s 7c) against the Q J spades of Jesse Sylvia. There was hardly a sweat whatsoever by the dealer and the odds-on favorite to win it all 9-handed would ended up doing just that, cashing in for $8.5 million and the coveted Main Event bracelet.

Congratulations again Greg Merson for you Main Event win and for overtaking Phil Hellmuth in the 2012 WSOP Player of the Year standings. Better luck next year Phil!

Here are the final results from the 2012 Main Event at the World Series of Poker: