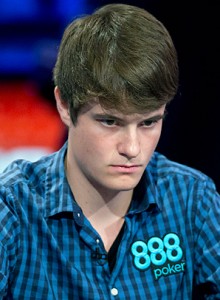 Arizona State University senior Jake Balsiger made the “Valley of the Sun” proud tonight as he not only made the 2012 WSOP Main Event final table, but he finished an epic run for the bracelet in 3rd place, just behind Greg Merson and Jesse Sylvia.

Balsiger started the final table eighth in chips, but continually began chipping away at his remaining 8 competitors. Clearly the coaching Balsiger had by famed Canadian pro Mike Macdonald paid off as the 21-year old continually chipped up with great position raises and timely wins in big all-in spots.

The event, which was broadcast live on ESPN, really began to get interesting during 3-handed play. When Russell Thomas was sent to the rail in 4th no one could’ve anticipated that over 11 hours later, 3-handed play would STILL be going on!

Chip leader Greg Merson and fellow poker pro Jesse Sylvia were heavily favored to put away the Arizona amateur rather easily during this time. However, as the blinds kept getting higher the momentum for Balsiger just kept increasing. It also didn’t hurt Balsiger either when he won two HUGE all-in’s during this time, who had hovered between $20 million and $40 million in chips all night.

The big moment for Jake Balsiger was when he coerced Jesse Slyvia into calling a 4-bet all-in with pocket Kings on a flop of 3 3 9. Sylvia showed K 9 and was drawing nearly dead. When the river bricked out Balsiger actually held the chip lead with over $90 million in his stack. That would be short-lived though as he would lose a big all-in BACK to Sylvia just a few minutes later.

Unfortunately from there the wheels began to fall off for Balsiger. After losing some other medium-sized pots he was down to under $30 million in chips at $800k/$1.6m blinds. With just $22m in his stack the final hand for Balsiger was against chip leader Greg Merson, who held KQ offsuit to his QT offsuit. The $45 million chip pot saw the board run out 6s 6d 6c Jc 5h, as Merson’s trip 6’s with a King kicker held up.