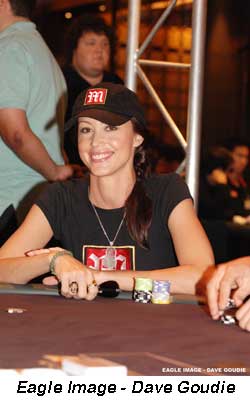 The 2008 Aussie Millions Main Event is going on this week and looks like there will be plenty of star power to go along with it. Of course there will be plenty of high powered poker professionals at the tableÃ¢â‚¬â„¢s but you can also count on seeing names such as Jennifer Tilly, Rick Solomon and Pamela Anderson, Andy Roddick and Shannon Elizabeth.

It is Shannon Elizabeth that has made the most recent poker news though. Recently the Crown Casino in Melbourne offered her free accommodations if she would in turn promote the tournament. She politely declined opting to pay her way to Australia and into the tournament.

Now, we may know why. It was announced that the American Pie beauty turned poker player will fly the banner of Mansion Poker when she competes for the guaranteed $1,000,000 first place prize at this yearÃ¢â‚¬â„¢s 2008 Aussie Millions Main Event.

Day 1 Flight 2 will be the debut down under for Elizabeth sporting her new Mansion Poker gear and ready to battle it out for five days with some of the very best poker has to offer. The Aussie Millions is one of the biggest tournaments of the year, and the richest held in Australia. Shannon has proven that she will be a force to reckon with at the table.

Her recent accomplishments include a semi-final finish at the 2007 NBC National Heads Up Championship beating along the way Barry Greenstein, Jeff Madsen and Humberto Brenes. In 2006 she placed in the money 3 times at the 2006 WSOP, once in the 2007 WSOP and also in the 2007 Victorian Poker Championships.