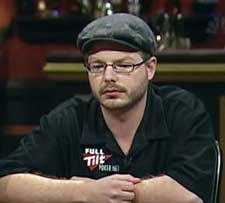 There werenÃ¢â‚¬â„¢t many surprises as far as poker goes in the third episode of Poker After DarkÃ¢â‚¬â„¢s dream table with Ken Light. There is however and interesting side note, Phil Hellmuth, with a record of 0-6 so far in PAD tournaments, is playing well and is second in chips.

Jennifer Harman had been card dead so far and is dead last in chips with less than 10,000. Amateur poker player Ken Light, a Full Tilt Poker freeroll winner that qualified him for this special dream table, is 4th in chips. Daniel Negreanu is still the leader and he and Hellmuth are the only ones above where they started in chips. As of the last chip count given:

No one made a huge move doing this show but Ken Light had a couple back to back wins. First was blind vs. blind and a bet on the turn won the pot and then the very next hand, Light was folded to in the SB with Kh Ts he raised to $800 and Daniel calls with Ad5d. The flop comes Ks Ac 3d and Light bets out $800 into the $1600 pot and is called by Negreanu. The turn brings a 3c and Ken again fires at the pot for $1200 and again Daniel calls. The river brings the Th.

With only a little hesitation Ken Light fires out $5000 and makes a, till then, passive Negreanu come alive. After a few minutes of banter and questioning from Daniel he finally says,

After another firing of questions from Daniel, he finally folds the best hand and Ken shows the Ã¢â‚¬Å“possibleÃ¢â‚¬Â bluff. Though he said he was bluffing, a vocal Phil Hellmuth wonders aloud if that was a bluff or an overvaluation of his hand.

After the third episode, still 6 sitting!