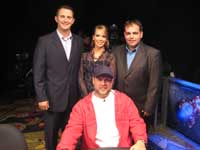 Crowning Another Champion at the Northern Lights Casino

The HPT event drew over five hundred players in the satellites, cash games and qualifiers last weekend. The HPT main event began on Sunday with a field of 136 players and played out until the early hours of Monday. Most main event players won their seats through the HPT qualifying system.

Sandness, an investment real estate manager and owner, entered the final table as one of the chip leaders. He traveled from Moorhead, Minnesota at 4am on Saturday to play in this monthÃ¢â‚¬â„¢s HPT main event. Sandness managed to avoid early elimination and took the chip lead after midnight. Sandness and Larry Barbetta were the final two players playing heads up. Sandness finally won the championship when his King/8 overtook 2nd place finisher Larry BarbettaÃ¢â‚¬â„¢s Ace/4.

Sandness added, Ã¢â‚¬Å“ItÃ¢â‚¬â„¢s been a very long day. The final table was really a grind, but it was fun. They were all good players and really good guys.Ã¢â‚¬Â

Over the past two years, HeartlandÃ¢â‚¬â„¢s popularity and growth has increased tremendously. To date the HPT has awarded a total of $6,236,154 in prizes. HPT television growth has escalated from 4 local stations to over 60 million homes. Rob Premo, Northern Lights Vice President of Table Games stated, Ã¢â‚¬Å“I think we had a really great event. We had lots of players–the poker room and the entire casino was hopping all weekend.Ã¢â‚¬Â

The HPT will finish 2007 with a busy schedule. The next tour stop will be the Golden Gates Casino in Black Hawk, Colorado from October1-14. The next week, the HPT will host a tournament at the Lucky Nugget Casino in Deadwood, South Dakota. The HPT will have two events in November. The first November poker tournament will be at the Meskwaki Casino in Tama, Iowa followed by a first time event at Casino Del Sol in Tucson, Arizona. The HPT will finish out the 2007 schedule with The HPT Championship Open at Majestic Star Casino in Gary, Indiana (outside Chicago).

Founded by Todd Anderson and Greg Lang in 2005, Heartland Poker Tour is built on a grass roots strategy, Ã¢â‚¬Å“Real People, Unreal MoneyÃ¢â‚¬Â. HPT provides poker enthusiasts a televised Texas No Limit HoldÃ¢â‚¬â„¢em poker tour with affordable buy-ins. HPT owns and operates the Heartland Poker League where poker players can build their skills through local weekly tournaments. HPT is currently in Season III and is viewed in over 60 million homes throughout the United States.