The 2012 World Series of Poker continues this week with several events finishing up and even more events beginning. Event #8, a $1,500 Omaha Hi/Lo Split-8 or Better tournament, and it is the latest WSOP event to finish up. The event saw a large, record-breaking turnout of 967 players and it was Herbert Tapscott who earned the first place win.

Tapscott is a veteran poker player from Alabama and he was able to win the coveted gold bracelet after he defeated Gavin Griffin in a tough heads up match. The final day of the tournament would take almost fourteen hours to complete and heads up play would last two hours, so the day was long.

The first player to exit the final table of the tournament was Bryan Jolly. Jolly had been butting heads with Kim Hua all day long and Hua got revenge by knocking Jolly out in ninth place. Raymond Davis would go out in eighth place after going all in with K-K-8-6 and was called by Thayer Rasmussen who held A-3-4-2. The flop fell K-6-4 and with a 10 on the turn and a 7 on the river, Rasmussen took the hand and Davis was out in eighth.

Despite taking out Davis in 8th, Rasmussen would go down in 7th place. Rasmussen went up against Griffin and Griffin would get a nut straight which was the winning hand. 6th place would go to John Racener after he went al in and was called by Griffin. Griffin was on a roll, and Racener would be his next victim.

Griffin continued his elimination spree by taking out Michael Kleist out in 5th. Kleist went all in with Q-6-9-2 and Griffin held A-K-3-8. With a board of K-10-6-7-A, Griffin held a pair and the hand, removing Kleist from the table.

4th place would go to Kim Hua after he took on the eliminator of the table, Griffin. Griffin went all in with his remaining 45,000 chips and was called by Hua. Griffin held Q-J-3-8 which gave him a nut straight on a 10-5-9 flop while Hua held A-Q-5-7 which gave him a pair of fives. The King on the river proved Hua’s downfall and Griffin earned much needed chips.

3rd place would go to Ashly Butler when he took on, you guessed it, Griffin as well as Tabscott. Butler went on all in and was called by Griffin. The board held 10-Q-2-Q-A and Butler held 10-J-9-6 and Griffin held 8-9-9-4 with Tapscott holding A-K-7-3. Tapscott held the winning hand and Butler was out and it was now a one on one tournament.

Heads up play would now begin and like we stated earlier, it would last about 2 hours. On the final hand, Griffin raised to 200,000 on the button and Tapscott called with a flop of Q-8-A. Griffin would be al in and Tapscott would call. Tapscott held Q-4-10-7 and Griffin held A-2-3-6. A 9 on the turn and a J on the river gave Tapscott a straight and he would win the hand as well as Event #8 of the WSOP.

November Nine Down to Six After Day One 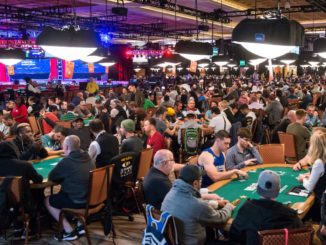