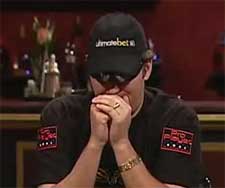 With must of Wednesday’s show more talk than poker but entertaining none the less, it was not until the beginning of ThursdayÃ¢â‚¬â„¢s show that we see the next elimination.

Sam Grizzle was only looking at 6K in chips and it was obvious that he had to make a move and he did. Sheikhan raised first in to $1600 with Kc Td. Grizzle looked down and saw the Ac and went all-in for $7050. Commenting to Shawn, Sam said,

Shawn called and Grizzle turned over the other card, the 5d. The flop was 9h Js Tc giving Shawn the lead and with the turn and river being the 9s 6c respectively. Sam Grizzle was eliminated 5th.

The chip count for the final four was now:

It seems now that poker was taking precedence over the talking, there is $120,000 at stake for this winner takes all event. It wasnÃ¢â‚¬â„¢t long before the next big hand comes up.

Phil limps in with 8s 8d on the button, Gavin calls with 5d 4d in the small blind and Jean-Robert checks the big blind with Ac 2h. Hellmuth has been going on all game that he will eventually trap Jean-Robert due to his over aggressive nature and when the flop comes 8c Ah 3s and all three players check, it looks like the trap is set.

The turn brings the 5s and both blinds check. Hellmuth bets out 1,000, Gavin Smith calls and Bellande raises to $2,500. With a very small hint of a smile it seemed, Hellmuth re-raises to $6500. Gavin gets out of the way and Bellande immediately declares all in and just as fast Hellmuth calls. With a 7h on the river, Phil Hellmuth doubles up through Jean-Robert Bellande and into second place. Bellande laughed it off though saying,

It was only a few hands later that there was another action flop with Gavin Smith limping on the button with Ah2h, Bellande folded the small blind and Shawn Sheikhan checked the big blind with 4s 4d. The flop of Ad Kh 4 h gave Sheikhan the set and Smith the nut flush draw. Shawn checked the big blind and Gavin bet out $1500. Shawn then check raised to $5500. Thinking only a few seconds, Gavin Smith moved all in and was immediately called by Sheikhan. Now only a heart that didnÃ¢â‚¬â„¢t pair the board could win it for Gavin. Unfortunately it wasnÃ¢â‚¬â„¢t to be with the turn being a Jc and the river a Kc. With that Gavin Smith was out in 4th and Shawn Sheikhan had a huge chip advantage.

Right before the end of the show, Bellande pushes all in with his last 9,000 in chips with KJ off suit and was called by Sheikhan with pocket twos, Bellande flops a king and that was all he needed. The talk is definitely over for now with three left and only the winner taking home $120,000.