Winning an Aussie Millions event is not an everyday thing. In fact, most players never manage to do it. However, Toby Lewis is not like most players, as he won events in this poker festival not once, not twice, but three times.

This Aussie Millions was the third year for him winning a title, and this time, he won Event No. 8: No-Limit Hold ’em Shot Clock Six-Max. Apart from the title, he also received a hefty reward — a total of A$148,030.

The first event Lewis took down was the 2018 Aussie Millions Main Event. However, he decided not to stop there and won an A$50,000 Challenge in 2019.

Few believed that he would be able to do it once again, and he proved everyone wrong by winning his third title. He beat the field of 258 players and won his second ANTON Jewellery Championship ring.

After being asked to share his thoughts, Lewis replied that he had been “running good” for most of the time. However, he didn’t deny the fact that his performance was positively affected by him being in a familiar place and a comfortable environment.

In other words, Lewis is a pretty common guest in Crown Casino, so the tournament felt like home to him.

Finally, being able to react quickly and make important decisions in a short amount of time was something that Lewis was very good at. After playing hundreds of hours of online poker, he mastered time-constrained events, which gave him a huge advantage over his opponents.

The Aussie Millions tournament took place at the Crown Casino in Melbourne, which recently donated more than A$4 million to bushfire relief.

The Final Table — Who Were Lewis’ Opponents?

Fourth place was reserved for a player named Kwok Chun Kong, who managed to win A$42,085. Finally, the last player to hit the rail before the heads-up part of the tournament was Justin Liberto. He ended up third and won A$56,600.

The final opponent whom Lewis had to face in heads-up play was Xiajing Ji. He was no match for Lewis and ended up second, claiming the consolation prize of A$97,235.

With three victories under his belt on the home court, everyone in Australia jokes about it, believing Lewis will win one event every year. So far, it seems that Lewis hasn’t disappointed his poker fans in the Land Down Under.

Needless to say, he will probably return in 2021 to test his skills and luck once again. The total amount of money he earned by playing poker in Crown alone is A$3.2 million. 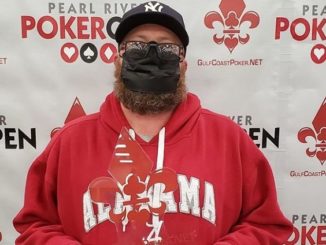