The 50th Annual World Series of Poker is underway as crème de la crème of the poker world gathered round to test their skills against each other, especially during the 2019 WSOP Main Event. However, many noticed that something was not so right with this year’s WSOP as one of the name did not appear on the list — Phil Hellmuth.

One of the best WSOP players ever did not seem to be showing interest in the competition as he decided to fly off to Machu Picchu all of a sudden with Peter Gruber and Rob Lowe. This was supposed to be their “trip of a lifetime,” but it came at the wrong time. In fact, many of Hellmuth’s fans started wondering what he was actually doing and why he went on a trip in the middle of the most important tournament in the world.

In fact, his fans were very worried about Hellmuth making it to the $10,000 Main Event this time. However, Hellmuth came just in time and registered before Day 2c started. His start was actually pretty good as he managed to chip up to 70,000 from 60,000 in a very short time. However, from that moment on, everything went down, resulting in Hellmuth’s ultimate demise.

He was only five hours in play after he hit the rail, frustrated with his performance. One of the hands that made the difference was his failed bluff. He clashed with Kou Vang, who is a circuit grinder, and that hand ultimately made him go down.

Hellmuth and Vang emerged in a three-bet pot as Hellmuth paired the ten-high board. Furthermore, the river brought him a four-card straight, so he decided to snap-shove the river. Vang decided to play the game and snap-called, having a total of two pairs. Vang picked up the bluff and won the hand, leaving Hellmuth with just 20 big blinds. He admitted afterward that his bluff had been pretty reckless and that Vang had made an amazing call.

Hellmuth changed his style after being down to 20 big blinds and slowly managed to grind his way back to half a starting pack. However, that was for a very short time as he was again down to 15,000. During the last hand, Hellmuth raised a 1,200 big blind ante to 2,8000, and Timothy Stanczak called it. The flop then showed a 4, 4, and a 3, and Stanczak decided to check. Hellmuth then decided that it was time to bet and put 5,200. Stanczak decided to check-raise to 12,200, which was more chips than Hellmuth had in his stack.

This made Hellmuth think for the entire two minutes. At last, he decided to go all in only to fail as Stanczak had pocket fives and Hellmuth had king-jack off-suit. This was the end for Hellmuth’s 2019 WSOP Main Event involvement. 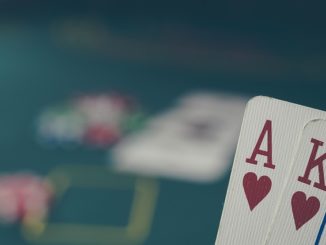