The 42-year-old pro who lives in Henderson, Nevada, got his fifth biggest score in his live poker tournament career. He won the 2016 World Poker Tour (WPT) Seminole Hard Rock Poker Showdown main event and has over $5.8 million lifetime earnings.

Young informed PokerGo reporters that he has been focusing more on winning cash for the last three years, and he had been desiring to return to the table in the past three months. His recent win justified his desire to fully go back to luxury poker tournaments.

The title means a lot to Young, and he considers it his biggest achievement since he started playing professional poker. He felt privileged to compete with other top players in the poker room.

Besides winning the cash prize and title, Young got 420 Card Player Player of the Year (POY) points for reaching the final table for the first table in 20. They helped him improve his 2022 POY leaderboard standing to be among the leading 200 players. He also garnered 200 PGT points that boosted his position in the PGT race to the 35th position.

Tommy Le, a World Series of Poker (WSOP) PLO bracelet winner, had a 4,160,000 chip lead when the Omaha event’s final day began. Young was second with 2,100,000, while each of the next four players had less than 1 million chips.

Alex Foxen was a short stack and was the first finalist to fall with double-suited A-Q-J-5. His single suit couldn’t beat Young’s pocket kings. Instead, Young made a top set flop as the last money went in. Foxen amassed 140 POY points and won $46,200 after finishing in the eighth position.

Young scored the day’s second knockout with a flopped six-high straight that bested Dylan Weisman, a bracelet winner’s wheel. The win enabled him to pull a virtual lead tie with Le.

Le got a king-high straight and pot from the QHeart Suit on the river. Radanov finished fourth and won $77,000.

Three-handed play lasted for almost two hours, and Dan Shak was the next player to get eliminated. All chips went in on 9Spade Suit8Club Suit6Spade SuitKClub Suit.

Le wagered 250,000 as Shak raised a pot. The former was moved all-in as Shak called with 8Diamond Suit7Heart Suit5Diamond Suit3Heart Suit for a nine-high straight. Yet, Le had AClub Suit7Diamond Suit6Club Suit5Spade Suit for the straight and flush draw.

He got the huge pot and nut flush from the 9Club Suit. Shan finished third and received $100,000. His poker career earnings increased to over $12.5 million.

Le had over 7 million after the hand and Young had slightly less than 2.5 million. The latter got a few suited side cards and a pocket kings double up against Le’s A-J-8-7 with nut diamonds. 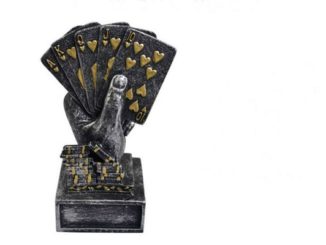 Global Poker Index Player of the Year is Alex Foxen