This Saturday night in prime time, the road to the college football national championship continues, as the Ohio State Buckeyes meet the Clemson Tigers at State Farm Stadium in Glendale, Ariz. The Fiesta Bowl looks to be a promising one as the No. 2- and No. 3-ranked teams in the country square off for battle.

Clemson, the defending national champion, looks to continue its 28-game win streak spanning back two seasons. Ohio State is making its first Playoff appearance since 2016, which ended in a Fiesta Bowl blowout loss to Clemson, 31-0.

So a little revenge-seeking from 2016 might be taking place. Or maybe Clemson comes out with its continued dominance and repeats the performance from these two teams’ last meeting.

It’d be hard to find a better matchup than you get with these two squads, as Clemson’s offense ranks fourth in scoring, averaging 46.5, while Ohio State’s offense led the nation, averaging 48.7.

Clemson’s defense ranks first in the nation in scoring, allowing only 10.6, while Ohio State’s is tied for third, giving up 12.5 per contest. Clemson is favored by two points headed into the weekend, with an over/under set at 63.

No team in the nation scored more frequently than the Buckeyes this season, led by quarterback Justin Fields, who comes into the contest with a slightly banged-up knee. Fields says his knee is 80 to 85 percent headed into the game, but facing the nation’s top defense, Ohio State needs Fields to come out firing.

His knee could have a direct impact on the end result of this matchup. Call it intuition, but I would imagine that Fields’ injury isn’t even noticed on Saturday.

Offensively, the Buckeyes are built around running back J.K. Dobbins. Dobbins feels like the nation’s fans and pundits aren’t giving his team enough respect, but that certainly isn’t his fault. Dobbins has tallied 2,029 total yards and 22 touchdowns.

He’s averaging an astounding 6.5 yards per carry, but don’t let that number fool you too much. Clemson’s rushing defense ranks seventh in the nation, only allowing 103.4 yards per game, and only 79 over their last three.

Dabo Swinney has led the Tigers to 28 straight victories and looks to make it 30 by season’s end, adding a second straight national title to his resume.

Clemson’s offense was no slouch this season, though it was often overshadowed by the defense. Led by future first-round pick, quarterback Trevor Lawrence, the Tigers’ passing game ranks 20th in the nation, averaging 295.8 yards per game, 357.3 over their last three. Ohio State Heisman finalist Chase Young needs to get after Lawrence. Young has 16.5 sacks so far this season.

Clemson linebacker Isaiah Simmons will lead the defense squaring off against the Fields-led offense. A couple of All-Americans doing battle. Should be just what the doctor ordered after a few weeks off from the college football season.
Simmons has seven sacks, 14.5 tackles for loss, two picks, and forced fumbles on the season. Can he force Fields and Dobbins to turn the ball over?

The Road To The Title Game

So the road to the national championship goes through Glendale, Ariz., in what should be a killer matchup. Pundits have already placed the Clemson blowout label on the game, but I don’t believe that to be true.

Both teams are undefeated, Ohio State is 9-4 against the spread, while Clemson is 10-3. On paper and on film, this contest should be a good one.

Unfortunately for the Buckeyes, Clemson has covered in four straight games, and they look for that to continue. The Tigers win this one and cover with ease on their way to another national championship game. 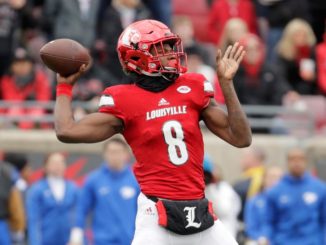 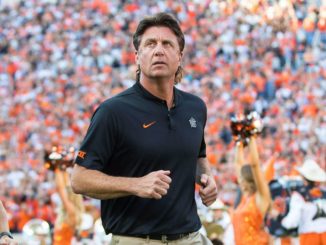 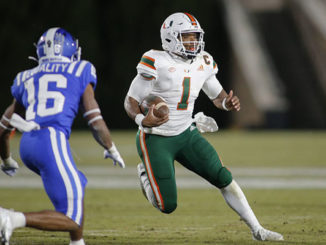