The SEC West kicks into high gear this week with a game between the no. 2 Alabama Crimson Tide and the no. 20 Arkansas Razorbacks. The Crimson Tide has won every game between these teams since 2006, although the Hogs only lost last year’s game 42-35. For Saturday’s game, Alabama is listed as a 16.5-point favorite with the over/under set at 61 points.

The Crimson tide is off and rolling early in the season. Granted, Alabama was a little fortunate to survive a scare with Texas a few weeks ago. But in their other three games against Utah State, Louisiana-Monroe, and Vanderbilt, the Crimson Tide has won by a combined score of 173-10.

On the other side, the Razorbacks are hoping to bounce back from a 23-21 loss to Texas A&M last week. The Hogs out-gained the Aggies, although they couldn’t complete the comeback after trailing by nine points heading into the fourth quarter, as a defensive touchdown by Texas A&M in the second quarter ended up being the difference. On the bright side, Arkansas did score wins over Cincinnati, South Carolina, and Missouri State to open the season.

As expected, quarterback KJ Jefferson has been the star of the Arkansas offense this season. The dual-threat quarterback rushed for over 100 yards against Texas A&M last week and already has eight passing touchdowns with just one interception through four games. Running back Raheim Sanders is also averaging better than six yards per carry on the season, helping to keep the Arkansas offense balanced.

Unfortunately, there has been plenty of pressure on Jefferson and the Arkansas offense this year. The Hogs allowed 30 points against a South Carolina team that’s 0-2 in SEC play and also allowed 27 points against FCS foe Missouri State. While the Arkansas defense has been among the best in the country at stopping the run, the Razorbacks have looked vulnerable on the back end, giving up far too many passing yards.

Alabama quarterback Bryce Young looks like he’s gearing up for a run at his second straight Heisman, already throwing 13 touchdown passes in two games. Even when things didn’t go Alabama’s way for long stretches against Texas, Young made the plays he needed to at the end of the game. As a team, the Crimson Tide is gaining 7.3 yards per carry, giving the Alabama offense plenty of balance.

Defensively, the numbers speak for themselves with the Crimson Tide allowing just 29 total points in four games. Obviously, outside of their win over a Texas team that has faded in recent weeks, Alabama hasn’t faced tough competition this season. However, they’ve kept three of their opponents to under 170 total yards, dominating despite forcing just one turnover in four games.

On the Road Again

Alabama struggled on the road against Texas, which is a concern heading into a road trip to Arkansas. While the Razorbacks have flaws, playing at home should help and Jefferson can be a handful. Given the uptick in competition for Alabama, bet on Arkansas to beat the spread, although the Crimson Tide will likely find a way to pull out a win. 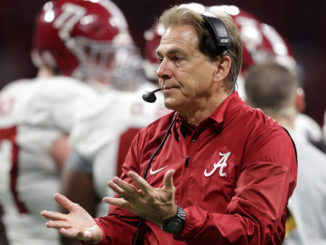