The 2008 World Series of Poker Main Event finally got back underway yesterday after a tremendously long 117 day break that simply took swept the momentum away from everyone. After a slow start to the final table, the action finally ceased with Ivan Demidov and Peter Eastgate set to battle it out in heads-up later today.

As the November 9 took their seats, everyone braced for an early exit from Kelly Kim, the low stack with about 11 Big Blinds to his name. Kim turned out to be a stronger competitor than expected, however, as Craig Marquis was busted out with a flopped when Scott Montgomery hit a Straight on the River. Marquis was sent to the rails in 9th.

It was a short-lived revitalization for Kelly Kim, however, when the next hand forced him all in on the Big Blind, resulting in an 8th place exit.

David ‘Chino’ Rheem then put his A-K up against EastgateÃ¢â‚¬â„¢s A-Q. RheemÃ¢â‚¬â„¢s impressive luck throughout the 2008 WOSP Main Event never quite returned to him yesterday as his strong hand faltered, sending him packing in 7th. It wasnÃ¢â‚¬â„¢t long before Peter Eastgate found another A-Q taking on an All-In A-8 from Darus Suharto. Eastgate hit a Flush on the Turn and it was all over for Suharto, the 6th place finisher.

The most atrocious elimination of the day came for 5th place finisher Scott Montgomery when a set of Aces, including one in the Hole, gave him a false sense of security. Once again it was Peter Eastgate who found the trumps. Holding Pocket 6s, Eastgate snagged a third on the River to complete the Full House. A bit later, Eastgate was blessed with another Full House that saw Ylon Schwartz, with an unimproved A-T, eliminated in 4th.

With only three competitors remaining, AmericaÃ¢â‚¬â„¢s favorite, Dennis Phillips, bluff-raised Eastgate into an All-In after the Flop. Phillips held only a backdoor draw that would need double runners for a Straight. Eastgate, on the other hand, had Flopped a set. PhillipsÃ¢â‚¬â„¢ 5% chance dwindled to 0%, leaving the last American standing to take a seat amongst his 300+ fan club, each wearing the same red St Louis Cardinals hat as the 3rd place finisher.

Later today, the final table will resume with heads-up action between two highly skilled European poker players, Peter Eastgate and Ivan Demidov. Should Eastgate take the title, he will break Phil HellmuthÃ¢â‚¬â„¢s 20-year-old record as the youngest individual to ever win the WSOP Main Event. On the other hand, should Demidov claim the crown, he will become the first Russian to earn the title.

Though Eastgate handled most of the eliminations in yesterdayÃ¢â‚¬â„¢s WSOP action, Demidov holds the chip lead with 79,500,000. Eastgate holds an equally respectable stack of 57,725,000 chips.

Note: HarrahÃ¢â‚¬â„¢s added $100,000 to the already massive prize pool after profiting from an investment of the original $25 million prize pool. 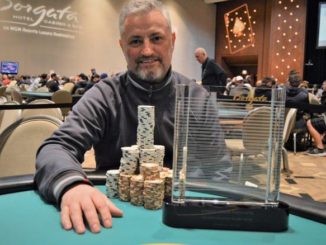