The Dusk Till Dawn Casino of Nottingham has played host to the partypoker LIVE UK Poker Championship, with several events having come to an end. The £5,300 Super High Roller tournament recently finished up with Steven Morris claiming the first-place win. With a field of 40 players, Morris was able to outlast the competition to earn the title and the £70,000 prize.

Morris would face off against Nishid Hindocha in heads-up play, with the players discussing a deal at one point. However, Morris felt his short-stack game was strong and he was confident that he could grind down his competitor to earn the win. His feeling was correct as he would eventually send Hindocha home in second place.

When heads-up play began, Morris would hold a nice 2 to 1 chip lead. However, Morris would double up and continue press the pro and eventually take the lead before the final hand went down. On the final hand, Morris would move all-in from the button with A-J of hearts and Hindocha would call with J-9 off-suit. The flop showed J-3-4, with both players having hope for the win. However, the Queen on the turn and the 4 on the river were no help to Hindocha, ending his time in the tournament.

Morris commented on his win by stating he felt ecstatic. The poker player stated that the first day was really tough as he face stiff competition including Michael Zhang, Steven Warburton, Dominik Nitsche and Tom Middleton. In the end, he was able to stand firm and finish the event in first place, earning his best live score ever. 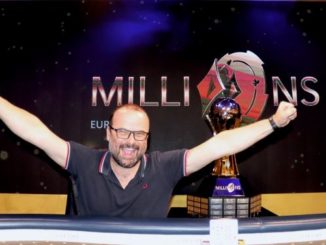