According to several personal blog reports and a forum posting on TwoPlusTwo, one of the most popular online poker forums in the world, a poker game at the Bellagio went south quickly just a few days ago when a poker player choked following a bad beat. Tony Korfman, a poker player and hilarious author, attacked a fellow player after his temper got the best of him. 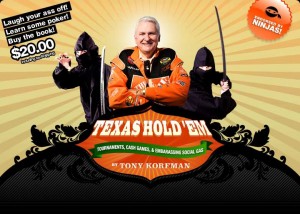 The tournament in question was a $1,000 re-buy second chance tournament at the Bellagio in Las Vegas Nevada.Ã‚Â  Korfman was participating in the poker tournament along with many other poker players.Ã‚Â  According to eye witness reports busted on the bubble and this angered him. So much in fact, that he grabbed a fellow player by the neck and began to yell obscenities at the player and then choke him.

Security guards had to intervene and pull Korfman off the poker player. Korfman was then escorted off the premises. The poker player who was assaulted decided to not press charges. The player was afraid pressing charges would cause another attack by Korfman.

Bryan Devonshire was the eye witness during the attack and he is the one who talked about the incident on TwoPlusTwo. Korfman must have seen DevonshireÃ¢â‚¬â„¢s post as he posted a reply which read:

Ã¢â‚¬Å“I did not bubble. He said punk bubbled then slammed his stack toward the guy that won the hand. punk was pissed because guy rivered him with a gutterball. then he had the balls to question weather the guy had him covered with part of his chips in the pot, part on the floor and part in the guyÃ¢â‚¬â„¢s stacks. I then mother ****ed him for being a prick and chaos ensued. I always defend the dealers, floor men and players that donÃ¢â‚¬â„¢t defend themselves. these types of punks should have been spanked when they were a kid. actually im sorry I didn’t pants him and take him over my knee. that would have been a great lesson for him. tk.Ã¢â‚¬Â

KorfmanÃ¢â‚¬â„¢s actions were wrong and now he is banned from the Bellagio until the casino says otherwise. It will be interesting to see what actions Korfman will take and if the ban will be lifted in the near future.

**Editors Note, he was wrong, he’s huge, he shouldn’t have done it, I’m buying this man’s book.