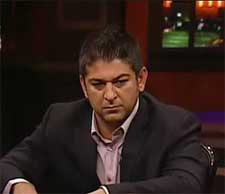 The Poker After Dark Hecklers Week has come down to three. Jean-Robert Bellande who is at his first PAD game, Shawn Sheikhan former PAD winner and Phil Hellmuth who just two weeks ago won his first PAD tournament.

The final three and there chips counts are:

The first hand of the evening saw Sheikhan fold the button and Hellmuth look down at As4c in the small blind and pushes all-in. Bellande in the big blind looks down and sees the Ac 8s and calls. Though ahead and in a dominating position, Bellande is everything but excited. Commenting to Phil at one time,

Even after a flop of 4h 6d 8c, Bellande is still fretting the cards to come and was asked by Sheikhan if he still felt concerned, Bellande said yes and just like he predicted, the turn brought the 4s putting Hellmuth way ahead and the 7d on the river sealed the deal and Jean-Robert Bellande went home in third place.

He didnÃ¢â‚¬â„¢t have any idea how unlucky he was either because as Bellande was leaving Sheikhan revealed he had folded a four and it was the case four in the deck that sent him home.

Going into heads up it was:

Interesting enough it was these two in the previous HecklerÃ¢â‚¬â„¢s week with Shawn winning his PAD title and it looked the same here with Shawn bullying Hellmuth, pushing him off winning hands and taking the first 6 heads up pots. Noticeably put off his game, Hellmuth does what he does bestÃ¢â‚¬Â¦cracks and starts to walk around, belittling Shawn, knocking down chip stacks and of course, the beeps.

After winning a few hands and building back up to around 30K, the temper tantrum instantly stopped and a better demeanor took hold. Phil was still way behind with 30K in chips to Shawn Sheikhan’s 90K.

Soon after though it seemed like Shawn has actually lost a little control over the game he had dominated up to that point. The turning point being when Sheikhan limped in with Kc6c and Hellmuth checked the big blind with Ac9s.

The flop came 7c 9d 9c in which Phil checked and Shawn bet $5,000 with his flush draw. Phil, taking his time, checked raised it to $11,000 and Shawn called instantly. The turn brought the 8s giving more outs to Sheikhan with an added open ended straight draw but Phil leads out with a $17,000 bet in which again Shawn took very little time in calling.

The river was a the 9h giving Phil quads, taking a pro-long time stacking and re-stacking chips he finally bets $15,000 which Shawn instantly folds and Phil is now the new chip leader. Shawn reflects after the hand and chastises himself saying,

Ã¢â‚¬Å“God, I am the worst player that was such a bad playÃ¢â‚¬Â¦embarrassing.Ã¢â‚¬Â

You can feel the momentum shift and the look on ShawnÃ¢â‚¬â„¢s face it seemed it was all over. Phil limps in 7s7h and Shawn raises to $10,000 with Qh9d and Phil went then goes all in over the top. Looking dejected, Shawn calls. Then Shawn gets lucky with a flop of Ah Ks Ac , the turn brings the Kd counterfeiting PhilÃ¢â‚¬â„¢s pocket pair. The river brought a Jh and Shawn wins the $64,500 pot, sends Hellmuth into another mini fit and evens up the chip count.

Shawn then lets everyone in on his new strategy,

Ã¢â‚¬Å“When I try to play good I suck so I am going to play reckless and get lucky.Ã¢â‚¬Â

With that Shawn seems to get his swagger back and goes all in the next three hands picking up the blinds. Back to playing very aggressive, Shawn Sheikhan seems to have weathered the storm and built his chip lead back up to 84K to Phil Hellmuths 36K.

It was here that lady luck intervened again.

Sheikhan limps with pocket kings and Phil goes all in with Ah4h. Shawn calls instantly triumphantly flipping over his kings. The flop comes Th Qs 2s and Phil gets up and starts to walk around. The turn though was the Ad and the river was no help and this heads up battle momentum switched again.

This time for good as the final hand Phil pushes with Qc2d and only seeing an As, Shawn calls putting all his chips in. Though we didnÃ¢â‚¬â„¢t see ShawnÃ¢â‚¬â„¢s last card till the end (Jd ) a flopped two and a another two on the turn gave Phil Hellmuth his second PAD victory in three weeks.