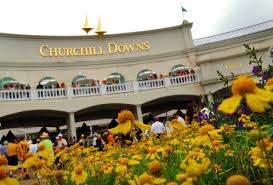 According to a recent report by the Courier-Journal, Churchill Downs of Louisville, Kentucky, has been working on a platform for online poker and other gaming options for some time now. Churchill Downs Inc.’s pursuits have been highlighted in a recent lawsuit against a company in New Jersey who the Kentucky Company would have been working with for the online gambling option.

According to the lawsuit, Churchill had hired 30 additional employees to work on the platform to provide online gambling in the state of New Jersey. Courtney Yopp Norris is a spokeswoman for Churchill and she did not comment as to if the platform was ready for launch if the opportunity came about and did not comment further on anything more than what was listed in the lawsuit.

One year ago, Churchill Downs received approval from the state to begin developing the gambling system via tax incentives to hire as many as fifty positions within the company for the project. In the lawsuit, Churchill claims they tried to enter the iGaming market in New Jersey since the option is legal there. The partner of Churchill reportedly misled the company about his abilities to hold up his end of the partnership.

Reportedly, the gambling platform was developed in Louisville and was going to launch in April of this year if the deal in New Jersey had been sound. The technology for the system would have been located in Louisville with just the minimal amount in New Jersey for infrastructure as needed to comply with the laws in the state.

The new system cost a reported $10 million and would have the ability to take casino wagers from customers located in New Jersey. The money was used to hire 30 people, which included 20 engineers to work on the platform. The company paid $2.5 million to Nicholas Ribis’ NLR Entertainment and were told that Ribis would be purchasing the Showboat Casino in Atlantic City. This would allow the Churchill Downs to operate online gambling in the state via the Showboat Casino. In the state of New Jersey, a brick and mortar property must be owned before online gaming license can be approved.

According to court documents, Ribis was to purchase the Showboat and Churchill would pay him an additional $7.5 million to be able to operate the online gambling platform for the Showboat. However, Churchill has now filed a lawsuit stating that Ribis was misleading in stating he was ‘about to close’ on the Showboat Casino and they want the $2.5 million back. The lawsuit is now active in the New Jersey Federal Court System.

Absolute Poker FAME: Win Anything From Bling-Bling To Free Gas