Every month, Microgaming releases the list of games that are going to be launched that month. A couple of days ago, the company released the July announcement, so let’s take a look at what games we’ll have an opportunity to play during the summer.

The 80s were a colorful decade filled with neon glow and great music. That’s why Snowborn Games, one of the Microgaming’s content partners, decided to take you to a warm summer night ride through Miami. You’ll have an opportunity to spin a five-reel slot which has the winning potential of up to 12,500x of the initial wager.

Mayan Eagle was released on July 7, and it was developed by All41 Studios. It comes with a non-standard 6×5 grid and a total of 15,625 ways to win.

Moreover, the game features a new payline mechanic called Nobleways. Moreover, if you make a winning combination, you will activate the popular Rolling Reels mechanic which will remove all symbols that are part of it and let the new symbols cascade into the grid.

This will offer you a new chance to make a combo and create an even bigger win. If you manage to spell MAYA with scatter symbols, you’ll be able to trigger the free spins feature.

Immortal Glory is a slot developed by Just For The Win, which is one of the main content partners to Microgaming. The game takes place in ancient Greece, where you’ll have an opportunity to take part in the ancient Greek Olympics and achieve “immortal glory.”

Of course, your job is to spin the reels and hope for the best outcome. The game is scheduled for release on July 14. It comes with 40 paylines and the win potential of up to 10,000x, according to the official press release.

Arthur’s Gold is another game by Just For The Win scheduled for July 9. It will take players to “an empire of riches” and will offer you an opportunity to win more than 4,000x of your initial bet. The game comes with an expanding wilds feature and a huge free spins bonus.

Diamond Inferno is created by Triple Edge Studios and is scheduled for release on July 21. The game will feature “fiery graphics, intuitive gameplay, and classic casino icons.”

Therefore, those who play Diamond Inferno will have an opportunity to spin the reels filled with symbols such as golden bars, sevens, and more. The slot comes with medium volatility and has several interesting features such as expanding reels, respins, multiplier trail, and diamond scatter wins.

Other games that will be released on the Microgaming network in July are Banana Drop (Crazy Tooth Studio), Monster Blast (Skillzzgaming), and Queen of Embers (1x2gaming). In other words, there’ll be plenty of new games to play on Microgaming’s network, which is available in dozens of casinos all over the web. 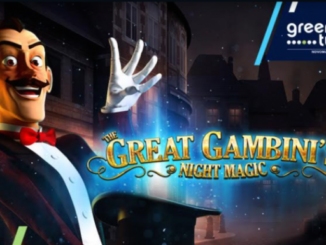 The Great Gambini’s Night Magic — A New Slot by Greentube