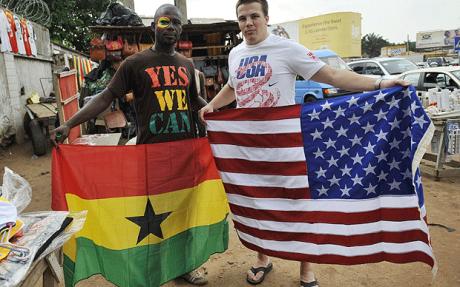 Ghana and USA both have a lot to prove as they enter into the World Cup finals this summer in Brazil and that will begin from the moment that both sides step onto the field as they meet June 16th in a game that both nations will be desperate to win due to the fact that neither side are being tipped by the bookies to advance out of Group G, where they are coming up against the frightening prospect of having to take on both Germany and Portugal in their plight to gain a place in the knockout phase.

African’s Ghana have shown a strong determination already to prove their worth on the international football stage, qualifying from what could be considered to have been the toughest group of the African continent as they won five of their six games before gaining a place in the play-off stages, where they then won 6-1 in a game that they dominated from start to finish before a slack 2-1 loss left them heading to the finals with a slightly sour taste in their mouths.

The United States are widely thought to be a developing nation on the international scene and with German legend Jurgen Klinsmann in the managerial seat, the USA look like they could well be set to offer a contest in their group as they play out the German’s attacking tactics and formation as they look to upset the odds and battle to see if they can steal a place in the next phase of the tournament.

Ranked as the 38th highest FIFA ranking nation, Ghana have a wealth of talent that are ready to represent their country in just their second participation within the FIFA World Cup finals but don’t let their lack of experience in the World Cup tournament fool you as they have performed well during the African Nations over the years.

With strength and power throughout their squad, Ghana will be looking to take the game to their opponents as they look to allow the likes of Michael Essien and Sulley Muntari to dictate the game from the centre of the field, while Asamoah Gyan will be considered to be the focal point of the Black Stars attacking line with the intention to use his pace to latch onto balls behind the opponents defensive line.

Head coach Kwesi Appiah is known for his desire to play attractive, attacking football and will be keen to showcase his tactics as his side head into battle against a USA side that they are expected to have a battle against while both nations are tipped to miss out on the top two places in the group.

Keen to build on their less than impressive loss last time out, Ghana will be looking to give themselves the best possible start to their Group G phase and will be sure to test the Americans in their pursuit for the full three points.

The Americans are set to make their ninth appearance in the World Cup finals and that means that they are no strangers to the fact that they will have to perform to their best if they are going to be able to qualify for the knockout phase of the competition, something that looks like it could be a long stretch with the presence of widely favoured Germany and Portugal in their group.

Ranked 14th in the FIFA World rankings, the USA have shown that they have a wealth of talent to showcase on the biggest footballing stage in the world, however German manager Jurgen Klinsmann shocked the nation with his decision to overlook Landon Donovan for selection this summer, a player that many believed would be a valuable member of the squad.

The nation has not had the best passages into the finals though, seeing themselves slip up a number of times to the point where the media and nation’s fans were questioning whether Klinsmann was the right man for the job as they head into the tournament, however the German was able to win over his doubters as he steered his side to a place in the proceedings in Brazil.

Klinsmann is known for his desire to attack his opponents and will echo that in his approach to this game as the US look to secure all three points from a tough fixture as they try to create a standing point on which they can look to build with a possible upset against one of the more favoured nations in the group.

Knowing that they are heading into Group G with little expectation to be able to secure a place in the last sixteen, the Americans will be hoping to relish the chance to show that even as underdogs they can produce some of their finest footballing moments.

As two nations that have everything to prove, this fixture looks like it could be one for the neutral as both sides look to gain the upper hand in their bid for a place in the top two finishing places in the group, allowing them to progress into the next round however with two strong footballing nations also contesting for the qualifying spots this game could well prove vital in a battle that is seen to be too much on paper.

Many believe that both Ghana and the USA will miss out on the next phase of the tournament and will have to settle with an early exit from the competition once the group stages have finished, however neither side will be looking to roll over just yet.