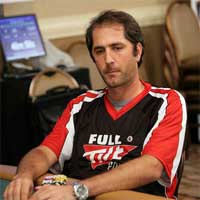 In 1997, before Phil Gordon had even reached the ripe age of 30, he retired from the world of technology to travel the world and play professional poker. It wasn’t until 2001 that Phil made a name for himself, finishing 4th in the World Series of Poker (WSOP) Main Event.

Phil Gordon cashed another four times in the 2006 WSOP, and again in the 2007 WSOP, the highest being a 4th place finish in the No Limit Hold’em Championship at Harrah’s New Orleans Poker Tournament, a WSOP Circuit Event.

Phil Gordon made history at the World Poker Tour (WPT) 2004 Bay 101 Shooting Star Tournament by sending two players to the rail in a single hand to win 1st place in the WPT No Limit Hold’em event, earning Phil $360,000.

In 2007, Gordon entered the NBC National Heads-Up Poker Championship. He defeated both Scotty Nguyen and Jamie Gold, champion of the 2006 WSOP Main Event, to advance through the tournament, but came up short of the final table. Gordon finished in 16th place, pocketing a purse of $25,000.

Phil Gordon has penned a number of books related to playing professional poker. His first publication, “Poker: The Real Deal” sold more than 100,000 copies within the first 4 months. Phil pushed the envelope with the release of his next book, titled “The Little Green Book of No-Limit Hold’em”, which to this day is regarded as a definitive no-limit hold’em strategy guide. Phil contributed to the book “Tales From the Tiltboys”, authored by Team Full Tilt members Phil Gordon and Kim Scheinberg.

Phil Gordon has made many appearances as a commentator for various poker programs. His most notable commentating was a seven-year stint, on Bravo’s “Celebrity Poker Showdown”. Gordon stepped down from his position in 2006. Gordon also provided commentary for Binion’s live Internet broadcast of the 2003 WSOP Championship Event, along with daily, national radio reports.

Phil Gordon and the CRFP

At a young age, Phil’s aunt taught him to play the game of poker, before her life was claimed by cancer. Gordon has put a great deal of effort into fundraising for the Cancer Research and Prevention Foundation (CRFP), a charity organization of which Phil Gordon is a Board Member.

Phil has facilitated multiple charity events, including $200 buy-in tournaments awarding entry to the WSOP Main Event and Celebrity Poker Tournaments. Gordon has also sold tip booklets to raise funds, as well as donating private lessons and autographed books for donations of $500 and $50 respectively (available at the CRFP web site). All proceeds went to the Cancer Research and Prevention foundation.