There are currently about 5000 SuperNOva ViP’s at PokerStars, the site is looking for 25 new members of their online poker team.

A Pokerstars representative on the popular 2+2 Poker forum confirmed today that Pokerstars is primarily looking for applicants from around the world, to represent each game, that have their own following, so a blog or their own website, an audience of some sort.

Some questions raised in recent discussions about the PokerStars Online Poker Team positions were:

It does sound as though PokerStars is looking for some help in the marketing department, looking to hire pro’s that are well known, and have a group of built in readers, additionally PokerStars gear is a requirement for live games (Hey stars, I want free gear! I’ll wear it!)

There’s been no mention of a live poker tournament requirement.

To Become a PokerStars Supernova VIP players have to earn 100,000 VIP Player Points during one year. The year stars in January and runs through December 31st just like a regular American Calender. Once you’ve earned the points and become a SuperNova, you remain SuperNova through at least February of the next year.

To hang onto their status after that, pokerstars SuperNova’s need to accumulate at least 10k VPP’s each month.

Whether or not PokerStars players make it as an a member of the new Online Team PokerStars, it pays to be a SuperNova at the online poker site. 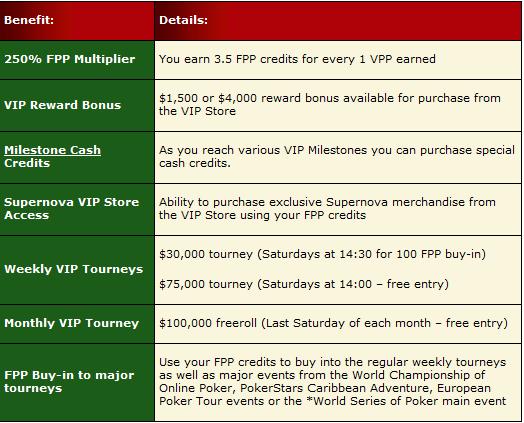