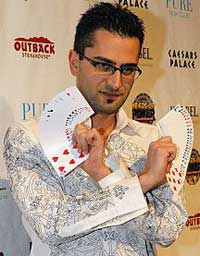 Antonio has come a long way since that day; he has won a WPT event and now has been announced as an official spokesperson for a company making him the first player representative for the company.

Esfandiari recalls, Ã¢â‚¬Å“I will never forget the day Steve Lipscomb hired me to perform magic at the press release party for the WPT. All I ever wanted was to play in a WPT event, let alone win one. To have actually won a few years later and to now become the official spokesperson for a company that did so much for poker and me personally is an honor I hold very dear to me. ItÃ¢â‚¬â„¢s great to be a part of the WPT, who has been such an instrumental part of my poker journey.Ã¢â‚¬Â

The WPTE explained that Antonio will use his experience and poker knowledge to help provide players and fans with poker tips, useful tools and a few tricks to help them become better players themselves. He will also provide on the spot tournament updates using all the WPT resources like WPY Live updates, web videos and online blogs. If that wasnÃ¢â‚¬â„¢t enough, Antonio will also cross the globe representing the WPT in tournaments and events.

Ã¢â‚¬Å“Antonio embodies the excitement that has become the WPT journey. This is the only sport in the history of televised sports that allows you to watch it, dream it, and be it. Now, WPT fans and poker enthusiasts can take the journey with Antonio as he leads the way for the next WPT Poker-Made Millionaire.Ã¢â‚¬Â