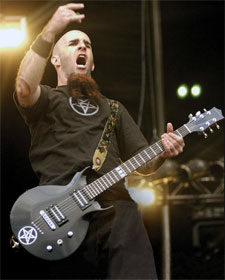 Anthrax guitarist Scott Ian, has added another poker notch in his belt by signing a deal to become the next online pro at Ultimate Bet. Ian won VH1Ã¢â‚¬â„¢s Rock Stars of Poker at the Palms in Las Vegas which gave him a seat at the 2007 Aruba Poker Classic held by Ultimate Bet. There he was quoted as saying,

“The Aruba Classic was a blast!! What a place to spend a week playing Poker. Even if you get knocked out early you’ve got a week on the beach. It’s a win-win. I’ll be back next year!!”

Looks like he will be back and under the tutoring of 11 time WSOP bracelet winner Phil Hellmuth may have something more than instinct to go on. According to Scott Ian, skill was not a factor in the first tournament.

“I had no idea what I was doing. My first tournament win was mostly because I had amazing cards. My instinct was all I had,” admitted Ian.

“We’re thrilled to add Scott Ian to our roster of online poker professionals. Scott represents a new breed of poker player that both Texas Hold’em and music fans can relate to.”

The Anthrax guitarist will be featured every Sunday in UltimateBet.com’s $200,000 Guaranteed poker tournament with a bounty on his head. The online poker player that knocks Scott Ian out of the tournament will win their $215 buy-in back.

Like he promised, Ian will be back at the 2008 Aruba Poker Classic as well as playing at the online poker tables on a regular basis at Ultimate Bet.